Jackson gadgets - Anatomy of a vulnerability

This research also resulted in a new CVE-2019-12384 and a bunch of RedHat products affected by it: 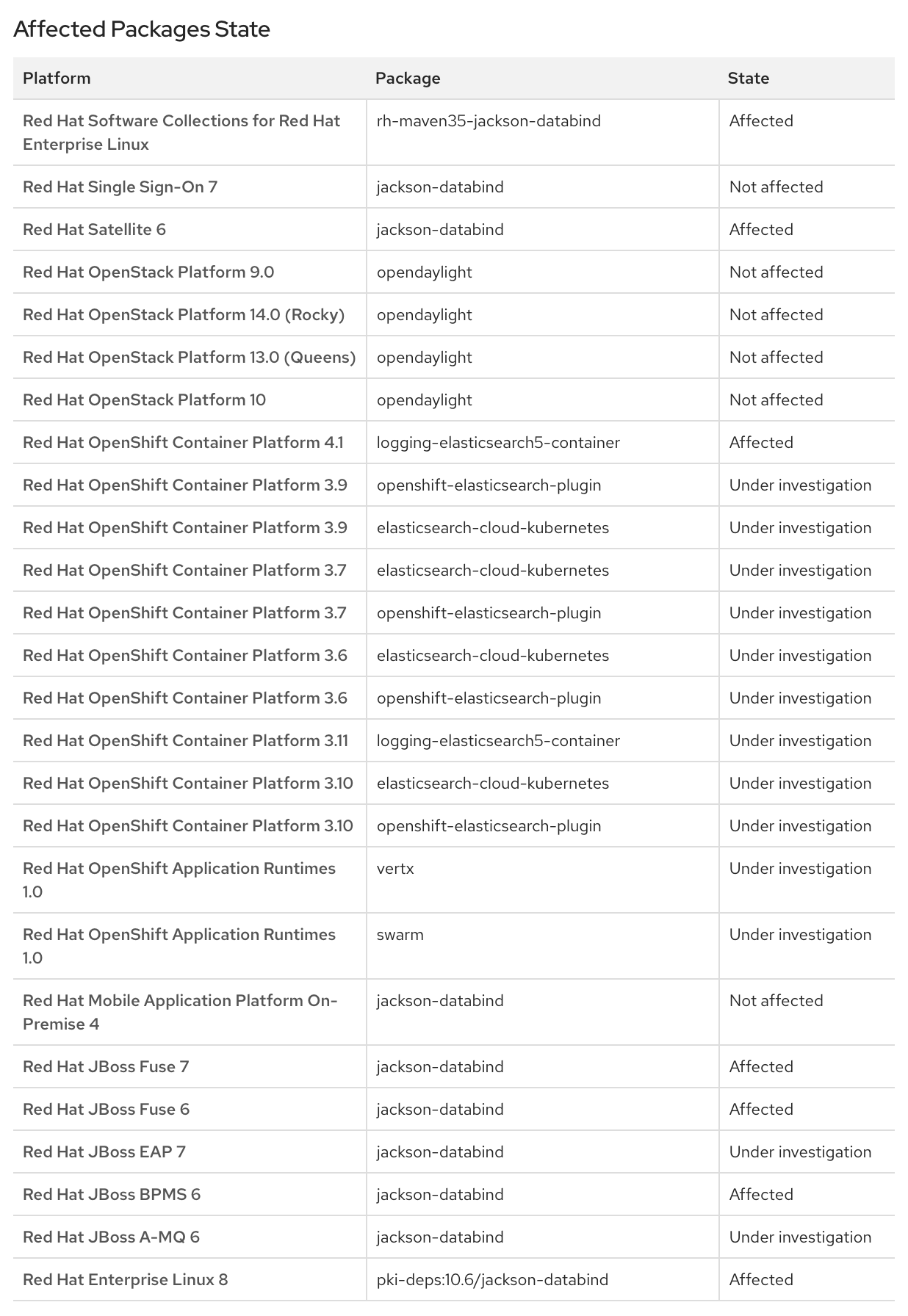 As reported by Jackson’s author in On Jackson CVEs: Don’t Panic — Here is what you need to know the requirements for a Jackson “gadget” vulnerability are:

In this research we assumed that the preconditions (1) and (2) are satisfied. Instead, we concentrated on finding a gadget that could meet both (3) and (4). Please note that Jackson is one of the most used deserialization frameworks for Java applications where polymorphism is a first-class concept. Finding these conditions comes at zero-cost to a potential attacker who may use static analysis tools or other dynamic techniques, such as grepping for @class in request/responses, to find these targets.

Preparing for the battlefield

During our research we developed a tool to assist the discovery of such vulnerabilities. When Jackson deserializes ch.qos.logback.core.db.DriverManagerConnectionSource, this class can be abused to instantiate a JDBC connection. JDBC stands for (J)ava (D)ata(b)ase (C)onnectivity. JDBC is a Java API to connect and execute a query with the database and it is a part of JavaSE (Java Standard Edition). Moreover, JDBC uses an automatic string to class mapping, as such it is a perfect target to load and execute even more “gadgets” inside the chain.

In order to demonstrate the attack, we prepared a wrapper in which we load arbitrary polymorphic classes specified by an attacker. For the environment we used jRuby, a ruby implementation running on top of the Java Virtual Machine (JVM). With its integration on top of the JVM, we can easily load and instantiate Java classes.

We’ll use this setup to load Java classes easily in a given directory and prepare the Jackson environment to meet the first two requirements (1,2) listed above. In order to do that, we implemented the following jRuby script.

The script proceeds as follows:

For this research we decided to use gadgets that are widely used by the Java community. All the libraries targeted in order to demonstrate this attack are in the top 100 most common libraries in the Maven central repository.

To follow along and to prepare for the attack, you can download the following libraries and put them in the “classpath” directory:

It should be noted the h2 library is not required to perform SSRF, since our experience suggests that most of the time Java applications load at least one JDBC Driver. JDBC Drivers are classes that, when a JDBC url is passed in, are automatically instantiated and the full URL is passed to them as an argument.

Using the following command, we will call the previous script with the aforementioned classpath.

On line 15 of the script, Jackson will recursively call all of the setters with the key contained inside the subobject. To be more specific, the setUrl(String url) is called with arguments by the Jackson reflection library. After that phase (line 17) the full object is serialized into a JSON object again. At this point all the fields are serialized directly, if no getter is defined, or through an explicit getter. The interesting getter for us is getConnection(). In fact, as an attacker, we are interested in all “non pure” methods that have interesting side effects where we control an argument.

When the getConnection is called, an in memory database is instantiated. Since the application is short lived, we won’t see any meaningful effect from the attacker’s perspective. In order to do something more meaningful we create a connection to a remote database. If the target application is deployed as a remote service, an attacker can generate a Server Side Request Forgery (SSRF). The following screenshot is an example of this scenario.

Enter the Matrix: From SSRF to RCE

As you may have noticed both of these scenarios lead to DoS and SSRF. While those attacks may affect the application security, we want to show you a simple and effective technique to turn a SSRF into a full chain RCE.

In order to gain full code execution in the context of the application, we employed the capability of loading the H2 JDBC Driver. H2 is a super fast SQL database usually employed as in memory replacement for full-fledged SQL Database Management Systems (such as Postgresql, MSSql, MySql or OracleDB). It is easily configurable and it actually supports many modes such as in memory, on file, and on remote servers. H2 has the capability to run SQL scripts from the JDBC URL, which was added in order to have an in-memory database that supports init migrations. This alone won’t allow an attacker to actually execute Java code inside the JVM context. However H2, since it was implemented inside the JVM, has the capability to specify custom aliases containing java code. This is what we can abuse to execute arbitrary code.

We can easily serve the following inject.sql INIT file through a simple http server such as a python one (e.g. python -m SimpleHttpServer).

And run the tester application with:

Exploitation of deserialization vulnerabilities is complex and takes time. When conducting a product security review, time constraints can make it difficult to find the appropriate gadgets to use in exploitation. On the other end, the Jackson blacklists are updated on a monthly basis while users of this mechanism (e.g. enterprise applications) may have yearly release cycles.

Deserialization vulnerabilities are the typical needle-in-the-haystack problem. On the one hand, identifying a vulnerable entry point is an easy task, while finding a useful gadget may be time consuming (and tedious). At Doyensec we developed a technique to find useful Jackson gadgets to facilitate the latter effort. We built a static analysis tool that can find serialization gadgets through taint-tracking analysis. We designed it to be fast enough to run multiple times and iterate/improve through a custom and extensible rule-set language. On average a run on a Macbook PRO i7 2018 takes 2 minutes.

Taint-tracking is a topical academic research subject. Academic research tools are focused on a very high recall and precision. The trade-off lies between high-recall/precision versus speed/memory. Since we wanted this tool to be usable while testing commercial grade products and we valued the customizability of the tool by itself, we focused on speed and usability instead of high recall. While the tool is inspired by other research such as flowdroid, the focus of our technique is not to rule out the human analyst. Instead, we believe in augmenting manual testing and exploitation with customizable security automation.

This research was possible thanks to the 25% research time at Doyensec. Tune in again for new episodes.

That’s all folks! Keep it up and be safe!