As promised in November 2021 at Hack In The Box #CyberWeek event in Abu Dhabi, we’re excited to announce that ElectroNG is now available for purchase at https://electro.ng/. 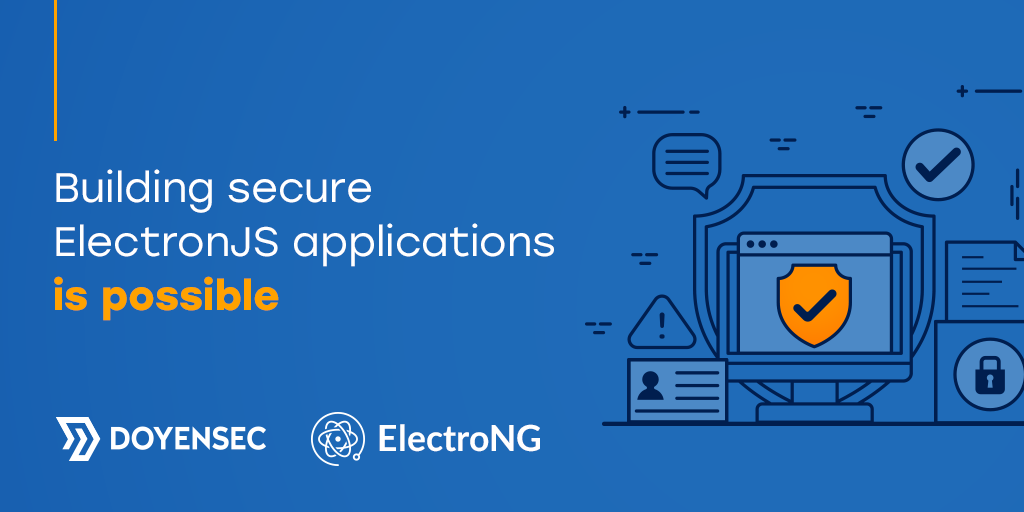 Our premium SAST tool for Electron applications is the result of many years of applied R&D! Doyensec has been the leader in Electron security since being the first security company to publish a comprehensive security overview of the Electron framework during BlackHat USA 2017. Since then, we have reported dozens of vulnerabilities in the framework itself and popular Electron-based applications.

A bit of history

We launched Electronegativity OSS at the beginning of 2019 as a set of scripts to aid the manual auditing of Electron apps. Since then, we’ve released numerous updates, educated developers on security best practices, and grown a strong community around Electron application security. Electronegativity is even mentioned in the official security documentation of the framework.

At the same time, Electron has established itself as the framework of choice for developing multi-OS desktop applications. It is now used by over a thousand public desktop applications and many more internal tools and custom utilities. Major tech companies are betting on this technology by devoting significant resources to it, and it is now evident that Electron is here to stay.

Considering the evolution of the framework and emerging threats, we had quickly realized that Electronegativity was in need of a significant refresh, in terms of detection and features, to be able to help modern companies in “building with security”.

At the end of 2020, we sat down to create a project roadmap and created a development team to work on what is now ElectroNG. In this blog post, we will highlight some of the major improvements over the OSS version. There is much more under the hood, and we will be covering more features in future posts and presentations. 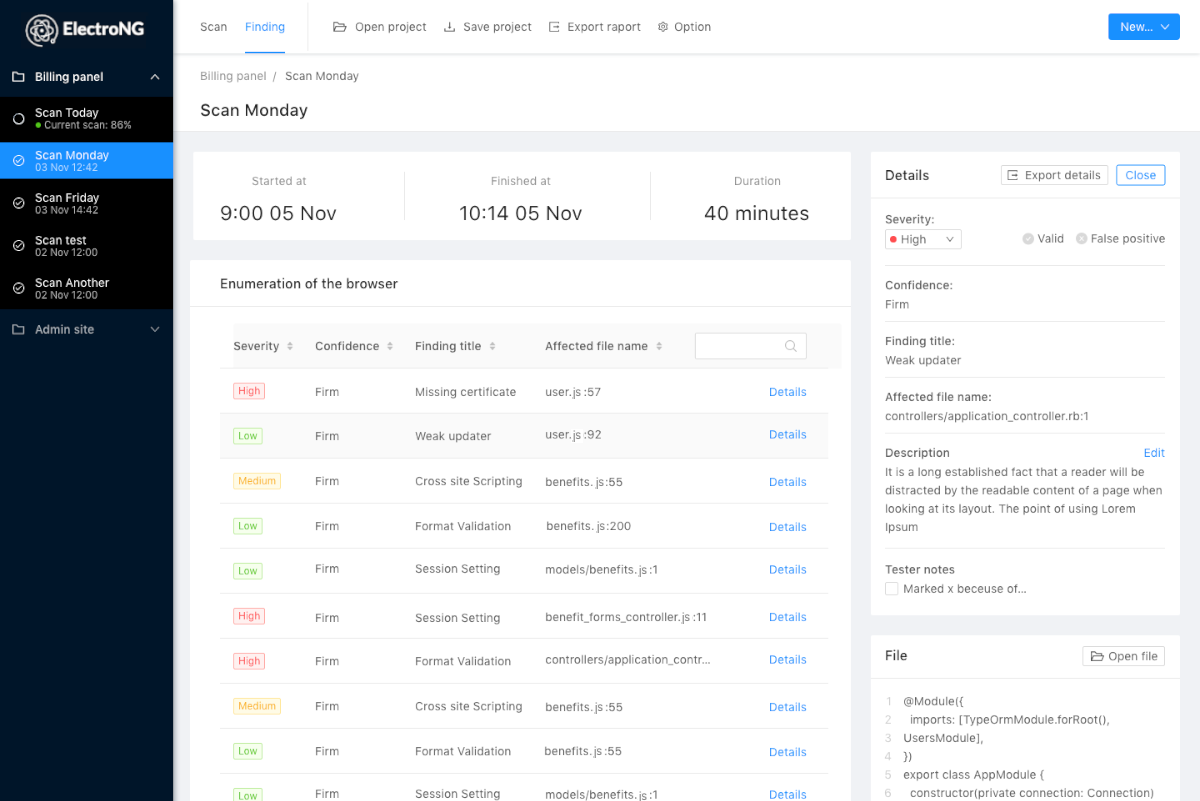 If you’ve ever used Electronegativity, it would be obvious that ElectroNG is no longer a command-line tool. Instead, we’ve built a modern desktop app (using Electron!).

ElectroNG features a new decision mechanism to flag security issues based on improved HTML/JavaScript/Typescript parsing and new heuristics. After developing that, we improved all existing atomic and conditional checks to reduce the number of false positives and improve accuracy. There are now over 50 checks to detect misconfigurations and security vulnerabilities!

However, the most significant improvement revolves around the creation of Electron-dependent checks. ElectroNG will attempt to determine the specific version of the framework in use by the application and dynamically adjust the scan results based on that. Considering that Electron APIs and options change very frequently, this boosts the tool’s reliability in determining things that matter.

To provide a concrete example to the reader, let’s consider a lesser-known setting named affinity. Electron v2 introduced a new BrowserView/BrowserWindow webPreferences option for gathering several windows into a single process. When specified, web pages loaded by BrowserView/BrowserWindow instances with the same affinity will run in the same renderer process. While this setting was meant to improve performance, it leads to unexpected results across different Electron versions.

Looking at the nodeIntegration setting defined by the two webPreferences definitions, one might expect the first BrowserWindow to have access to Node.js primitives while the second one to be isolated. This is not always the case and this inconsistency might leave an insecure BrowserWindow open to attackers.

The results across different Electron versions are surprising to say the least: 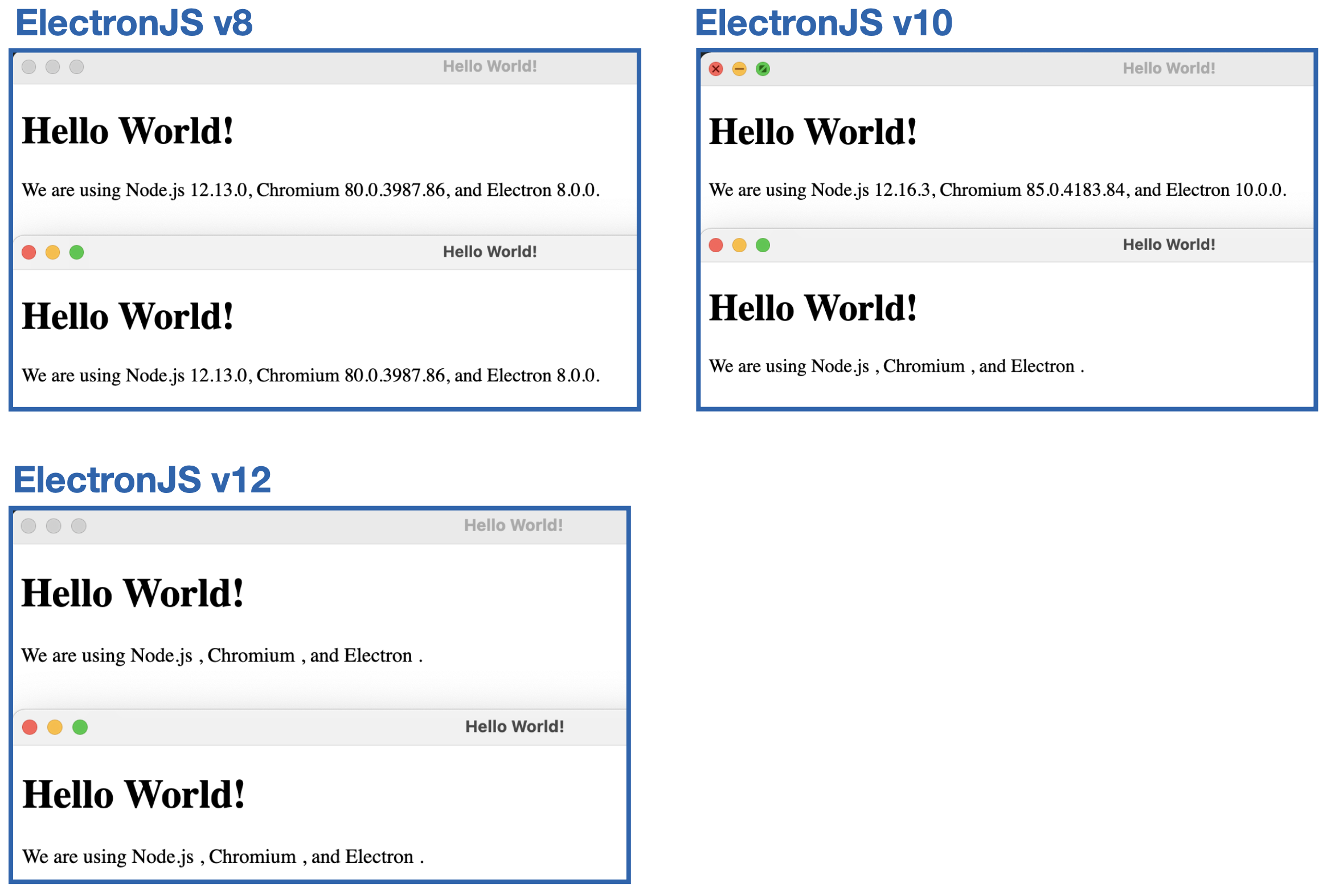 The affinity option has been fully deprecated in v14 as part of the Electron maintainers’ plan to more closely align with Chromium’s process model for security, performance, and maintainability. This example demonstrates two important things around renderers’ settings:

ElectroNG is available for online purchase at $688/year per user. Visit https://electro.ng/buy.

The license does not limit the number of projects, scans, or even installations as long as the software is installed on machines owned by a single individual person. If you’re a consultant, you can run ElectroNg for any number of applications, as long as you are running it and not your colleagues or clients. For bulk orders (over 50 licenses), contact us!

With the advent of ElectroNG, we have already received emails asking about the future of Electronegativity.

Electronegativity & ElectroNG will coexist. Doyensec will continue to support the OSS project as we have done for the past years. As usual, we look forward to external contributions in the form of pull requests, issues, and documentation.

ElectroNG’s development focus will be towards features that are important for the paid customers with the ultimate goal of providing an effective and easy-to-use security scanner for Electron apps. Having a team behind this new project will also bring innovation to Electronegativity since bug fixes and features that are applicable to the OSS version will be also ported.

As successfully done in the past by other projects, we hope that the coexistence of a free community and paid versions of the tool will give users the flexibility to pick whatever fits best. Whether you’re an individual developer, a small consulting boutique, or a big enterprise, we believe that Electronegativity & ElectroNG can help eradicate security vulnerabilities from your Electron-based applications.