ElectronJs is getting more secure every day. Context isolation and other security settings are planned to become enabled by default with the upcoming release of Electron 12 stable, seemingly ending the somewhat deserved reputation of a systemically insecure framework.

Seeing such significant and tangible progress makes us proud. Over the past years we’ve committed to helping developers securing their applications by researching different attack surfaces:

As confirmed by the Electron development team in the v11 stable release, they plan to release new major versions of Electron (including new versions of Chromium, Node, and V8), approximately quarterly. Such an ambitious versioning schedule will also increase the number and the frequency of newly introduced APIs, planned breaking changes, and consequent security nuances in upcoming versions. While new functionalities are certainly desirable, new framework’s APIs may also expose powerful interfaces to OS features, which may be more or less inadvertently enabled by developers falling for the syntactic sugar provided by Electron. 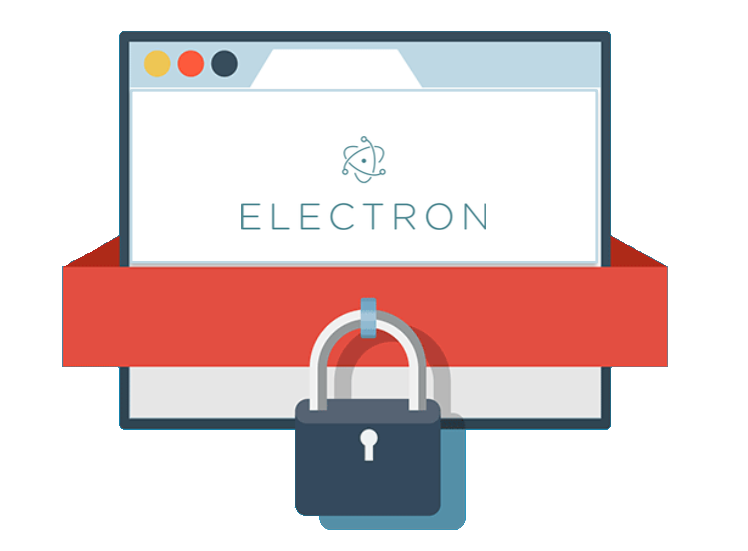 Such interfaces may be exposed to the renderer’s, either through preloads or insecure configurations, and can be abused by an attacker beyond their original purpose. An infamous example of this is openExternal.

Shell’s openExternal() allows opening a given external protocol URI with the desktop’s native utilities. For instance, on macOS, this function is similar to the open terminal command utility and will open the specific application based on the URI and filetype association. When openExternal is used with untrusted content, it can be leveraged to execute arbitrary commands, as demonstrated by the following example:

Similarly, shell.openPath(path) can be used to open the given file in the desktop’s default manner.

From an attacker’s perspective, Electron-specific APIs are very often the easiest path to gain remote code execution, read or write access to the host’s filesystem, or leak sensitive user’s data. Malicious JavaScript running in the renderer can often subvert the application using such primitives.

With this in mind, we gathered a non-comprehensive list of APIs we successfully abused during our past engagements. When exposed to the user in the renderer, these APIs can significantly affect the security posture of Electron-based applications and facilitate nodeIntegration / sandbox bypasses.

While this seems pretty useful, this API has been a source of performance and security troubles for quite a while. As a result of that, the remote module will be deprecated in Electron 12, and eventually removed in Electron 14.

Despite the warnings and numerous articles on the topic, we have seen a few applications exposing Remote.app to the renderer. The app object controls the full application’s event lifecycle and it is basically the heart of every Electron-based application.

Many of the functions exposed by this object can be easily abused, including but not limited to:

Taking the first function as a way of example, app.relaunch([options]) can be used to relaunch the app when the current instance exits. Using this primitive, it is possible to specify a set of options, including a execPath property that will be executed for relaunch instead of the current app along with a custom args array that will be passed as command-line arguments. This functionality can be easily leveraged by an attacker to execute arbitrary commands.

Note that the relaunch method alone does not quit the app when executed, and it is also necessary to call app.quit() or app.exit() after calling the method to make the app restart.

Another frequently exported module is systemPreferences. This API is used to get the system preferences and emit system events, and can therefore be abused to leak multiple pieces of information on the user’s behavior and their operating system activity and usage patterns. The metadata subtracted through the module could be then abused to mount targeted attacks.

The latest NSDistributedNotificationCenter API also seems to be having intermittent problems with Big Sur and sandboxed application, so we expected to see more breaking changes in the future.

The getUserDefault function returns the value of key in NSUserDefaults, a macOS simple storage class that provides a programmatic interface for interacting with the defaults system. This systemPreferences method can be abused to return the Application’s or Global’s Preferences. An attacker may abuse the API to retrieve sensitive information including the user’s location and filesystem resources. As a matter of demonstration, getUserDefault can be used to obtain personal details of the targeted application user:

Complementarily, the setUserDefault method can be weaponized to set User’s Default for the Application Preferences related to the target application. Before Electron v8.3.0 [1], [2] these methods can only get or set NSUserDefaults keys in the standard suite.

A subtle example of a potentially dangerous native Electron primitive is shell.showItemInFolder. As the name suggests, this API shows the given file in a file manager.

Such seemingly innocuous functionality hides some peculiarities that could be dangerous from a security perspective.

On Linux (/shell/common/platform_util_linux.cc), Electron extracts the parent directory name, checks if the resulting path is actually a directory and then uses XDGOpen (xdg-open) to show the file in its location:

xdg-open can be leveraged for executing applications on the victim’s computer.

“If a file is provided the file will be opened in the preferred application for files of that type” (https://linux.die.net/man/1/xdg-open)

Because of the inherited time of check time of use (TOCTOU) condition caused by the time difference between the directory existence check and its launch with xdg-open, an attacker could run an executable of choice by replacing the folder path with an arbitrary file, winning the race introduced by the check. While this issue is rather tricky to be exploited in the context of an insecure Electron’s renderer, it is certainly a potential step in a more complex vulnerabilities chain.

On Windows (/shell/common/platform_util_win.cc), the situation is even more tricky:

Under normal circustances, the SHOpenFolderAndSelectItems Windows API (from shlobj_core.h) is used. However, Electron introduced a fall-back mechanism as the call mysteriously fails with a “file not found” exception on old Windows systems. In these cases, ShellExecute is used as a fallback, specifying “open” as the lpVerb parameter. According to the Windows Shell documentation, the “open” object verb launches the specified file or application. If this file is not an executable file, its associated application is launched.

While the exploitability of these quirks is up to discussions, these examples showcase how innoucous APIs might introduce OS-dependent security risks. In fact, Chromium has refactored the code in question to avoid the use of xdg-open altogether and leverage dbus instead.

The Electron APIs illustrated in this blog post are just a few notable examples of potentially dangerous primitives that are available in the framework. As Electron will become more and more integrated with all supported operating systems, we expect this list to increase over time. As we often repeat, know your framework (and its limitations) and adopt defense in depth mechanisms to mitigate such deficiencies.

As a company, we will continue to devote our 25% research time to secure the ElectronJS ecosystem and improve Electronegativity.