The Wi-Fi Direct specification (a.k.a. “peer-to-peer” or “P2P” Wi-Fi) turned 10 years old this past April. This 802.11 extension has been available since Android 4.0 through a dedicated API that interfaces with a devices’ built-in hardware which directly connects to each other via Wi-Fi without an intermediate access point. Multiple mobile vendors and early adopters of this technology quickly leveraged the standard to provide their products with a fast and reliable file transfer solution.

After almost a decade, a huge majority of mobile OEMs still rely on custom locked-in implementations for file transfer, even if large cross-vendors alliances (e.g. the “Peer-to-Peer Transmission Alliance”) and big players like Google (with the recent “Nearby Share” feature) are moving to change this in the near future. 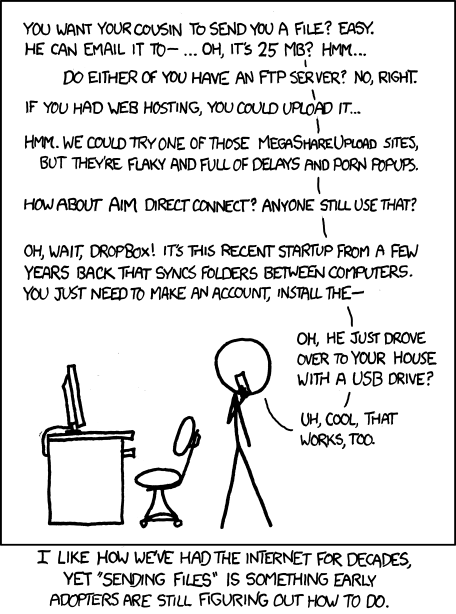 During our research, three popular P2P file transfer implementations were studied (namely Huawei Share, LG SmartShare Beam, Xiaomi Mi Share) and all of them were found to be vulnerable due to an insecure shared design. While some groundbreaking research work attacking the protocol layer has already been presented by Andrés Blanco during Black Hat EU 2018, we decided to focus on the application layer of this particular class of custom UPnP service.

These two services are used for device discovery, pairing and sessions, authorization requests, and file transport functions. Usually they are implemented as classes of a shared parent application which orchestrate the entire transfer. These components are responsible for:

An important consideration for the following abuses is that after a P2P Wi-Fi connection is established, its network interface (p2p-wlan0-0) is available to every application running on the user’s device having android.permission.INTERNET. Because of this, local apps can interact with the FTS and FTC services spawned by the file sharing applications on the local or remote device clients, opening the door to a multitude of attacks.

Smartshare is a stock LG solution to connect their phones to other devices using Wi-Fi (DLNA, Miracast) or Bluetooth (A2DP, OPP). The Beam feature is used for file transfer among LG devices.

As a way of example, the following HTTP requests demonstrate the FTC and the FTS in action whenever a file transfer session between two parties is requested. First, the FTS performs a CreateSendSession SOAP action:

The SessionInformation node embeds an entity-escaped standard Wi-Fi Alliance schema, urn:wfa:filetransfer, transmitting a CuteCat.jpg picture. The file name (MetaInfo/Item/Name) is displayed in the file transfer prompt to show to the final recipient the name of the transmitted file. By design, after the recipient’s confirmation, a CreateSendSessionResponse SOAP response will be returned:

This will contain the TransportInfo destination port that will be used for the final transfer:

What could go wrong?

Unfortunately this design suffers many issues, such as:

Because of the above design issues, any malicious third-party application installed on one of the peers’ devices may influence or take over any communication initiated by the legit LG SmartShare applications, potentially hijacking legit file transfers. A wormable malicious application could abuse this insecure design to flood the local or remote victim waiting for a file transfer, effectively propagating its malicious APK without user interaction required. An attacker could also abuse this design to implant arbitrary files or evidence on a victim’s device.

Huawei Share is another file sharing solution included in Huawei’s EMUI operating system, supporting both Huawei terminals and those of its second brand, Honor.

Unfortunately, the stumbling block for Huawei Share is the stability of the services: multiple HTTP requests that could respectively crash the FTCService or FTSService were identified. Since the crashes could be triggered by any third-party application installed on the user’s device and because of the UPnP General Event Notification Architecture (GENA) design itself, an attacker can still take over any communication initiated by the legit Huawei Share applications, stealing Session IDs and hijacking file transfers.

In the replicated attack scenario, Alice and Bob’s devices are connected and paired on a Direct Wi-Fi connection. Bob also unwittingly runs a malicious application with little or no privileges on his device. In this scenario, Bob initiates a file share through Huawei Share 1. His legit application will, therefore, send a CreateSession SOAP action through a POST request to Alice’s FTCService to get a valid SessionID, which will be used as an authorization token for the rest of the transaction. During a standard exchange, after Alice accepts the transfer on her device, a file share event notification (NOTIFY /evetSub) will fire to Bob’s FTSService. The FTSService will then be used to serve the intended file.

Since an inherent time span exists between the manual acceptance of the transfer by Alice and its start, the malicious application could perform a request with an ad-hoc payload to trigger a crash of FTSService 2 and subsequently bind to the same port its own FTSService 3. Because of the UPnP event subscription and notification protocol design, the NOTIFY event including the SessionID (1924435235 in the example above) can now be intercepted by the fake FTSService 4 and used by the malicious application to serve arbitrary files.

The crashes are undetectable both to the device’s user and to the file recipient. Multiple crash vectors using malformed requests were identified, making the service systemically weak and exploitable.

Introduced with MIUI 11, Xiaomi’s MiShare offers AirDrop-like file transfer features between Mi and Redmi phones. Recently this feature was extended to be compatible with devices produced by the “Peer-to-Peer Transmission Alliance” (including vendors with over 400M users such as Xiaomi, OPPO, Vivo, Realme, Meizu).

Due to this transition, MiShare internally features two different sets of APIs:

The websocket-based API is currently used by default for transfers between Xiaomi Devices and this is the one we assessed. As in other P2P solutions, several minor design and implementation bugs were identified:

On a brighter note, the Mi Share protocol design was hardened using per-session TLS certificates when communicating through WSS and HTTPS, limiting the exploitability of many security issues.

Some of the attacks described can be easily replicated in other existing mobile file transfer solutions. While the core technology has always been there, OEMs still struggle to defend their own P2P sharing flavors. Other common vulnerabilities found in the past include similar improper access control issues, path traversals, XML External Entity (XXE), improper file management, and monkey-in-the-middle (MITM) of the connection.

All vulnerabilities briefly described in this post were responsibly disclosed to the respective OEM security teams between April and June 2020.