Staring into the Spotlight

Spotlight is the all pervasive seeing eye of the OSX userland. It drinks from a spout of file events sprayed out of the kernel and neatly indexes such things for later use. It is an amalgamation of binaries and libraries, all neatly fitted together just to give a user oversight of their box. It presents interesting attack surface and this blog post is an explanation of how some of it works.

One day, we found some interesting looking crashes recorded in /Users/<name>/Library/Logs/DiagnosticReports

Yet the crashes weren’t from the target. In OSX, whenever a file is created, a filesystem event is generated and sent down from the kernel. Spotlight listens for this event and others to immediately parse the created file for metadata. While fuzzing a native file parser these Spotlight crashes began to appear from mdworker processes. Spotlight was attempting to index each of the mutated input samples, intending to include them in search results later.

The Spotlight system is overseen by mds. It opens and reads from /dev/fsevents, which streams down file system event information from the kernel. Instead of dumping the events to disk, like fseventsd, it dumps the events into worker processes to be parsed on behalf of Spotlight. Mds is responsible for delegating work and managing mdworker processes with whom it communicates through mach messaging. It creates, monitors, and kills mdworkers based on some light rules. The kernel does not block and the volume of events streaming through the fsevents device can be quite a lot. Mds will spawn more mdworker processes when handling a higher event magnitude but there is no guarantee it can see and capture every single event.

The kernel filters which root level processes can read from this device.

Each of the mdworker processes get spawned, parse some files, write the meta info, and die. Mdworker shares a lot of code with mdimport, its command line equivalent. The mdimport binary is used to debug and test Spotlight importers and therefore makes a great target for auditing and fuzzing. Much of what we talk about in regards to mdimport also applies to mdworker.

You can see what mdworkers are up to with the following: sudo fs_usage -w -f filesys mdworker

Importers are found in /Library/Spotlight, /System/Library/Spotlight, or in an application’s bundle within “/Contents/Library/Spotlight”. If the latter is chosen, the app typically runs a post install script with mdimport -r <importer> and/or lsregister. The following command shows the list of importers present on my laptop. It shows some third party apps have installed their own importers.

These .mdimporter files are actually just packages holding a binary. These binaries are what we are attacking.

Using mdimport is simple - mdimport <file>. Spotlight will only index metadata for filetypes having an associated importer. File types are identified through magic. For example, mdimport reads from the MAGIC environment variable or uses the “/usr/share/file/magic” directory which contains both the compiled .mgc file and the actual magic patterns. The format of magic files is discussed at the official Apple developer documentation. 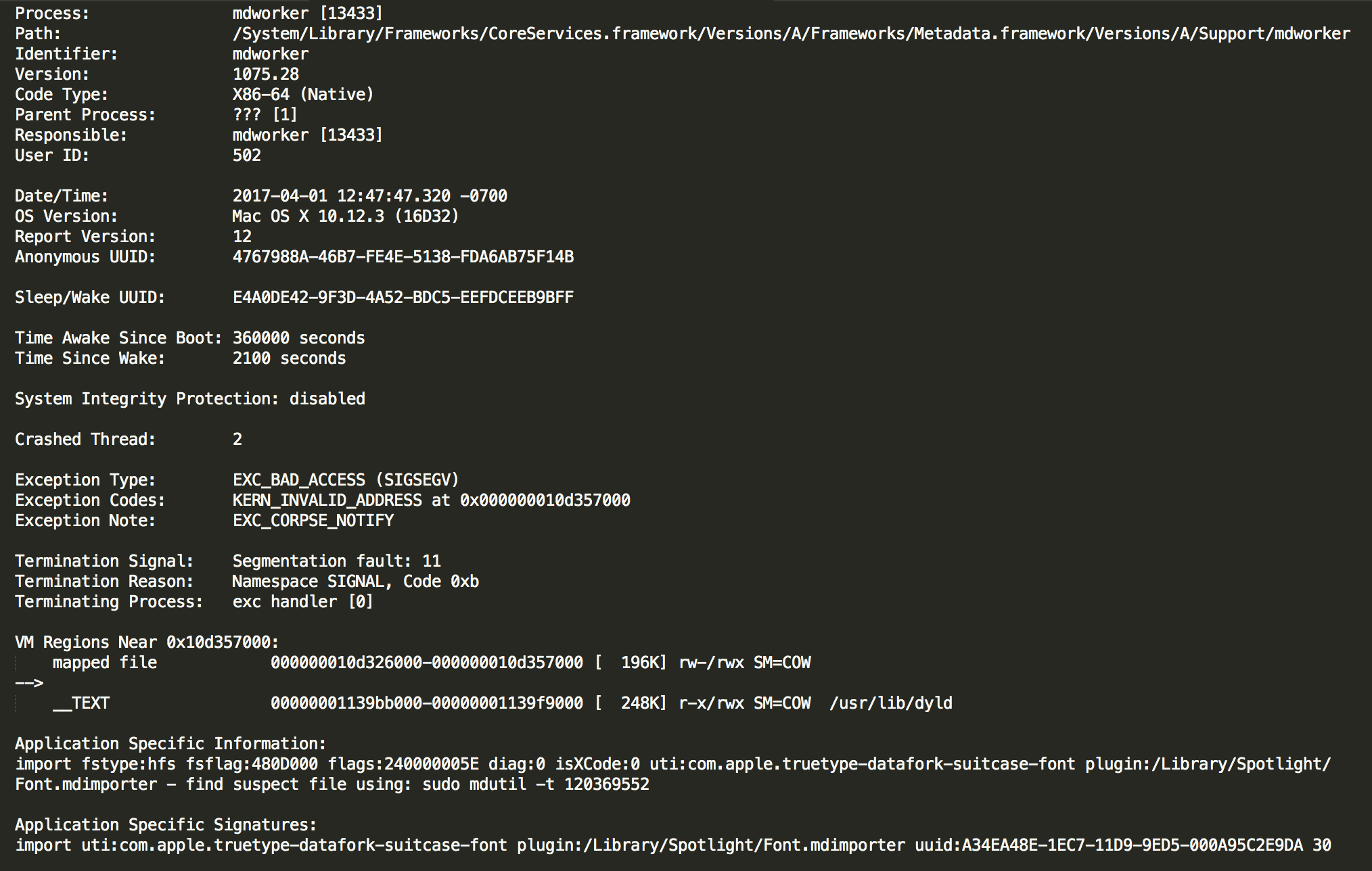 One thing to notice is that the crash log will contain some helpful information about the cause. The following message gets logged by both mdworker and mdimport, which share much of the same code:

The 2682437 is the iNode reference number for the file in question on disk. The -t argument to mdutil will ask it to lookup the file based on volume ID and iNode and spit out the string. It performs an open and fcntl on the pseudo directory /.vol/<Volume ID>/<File iNode>. You can see this info with the stat syscall on a file.

The UTI registered by the importer is also shown “com.apple.truetype-datafork-suitcase-font”. In this case, the crash is caused by a malformed Datafork TrueType suitcase (.dfont) file.

When we find a bug, we can study it under lldb. Launch mdimport under the debugger with the crash file as an argument. In this particular bug it breaks with an exception in the /System/Library/Spotlight/Font.mdimporter importer.

The screenshot below shows the problem procedure with the crashing instruction highlighted for this particular bug. 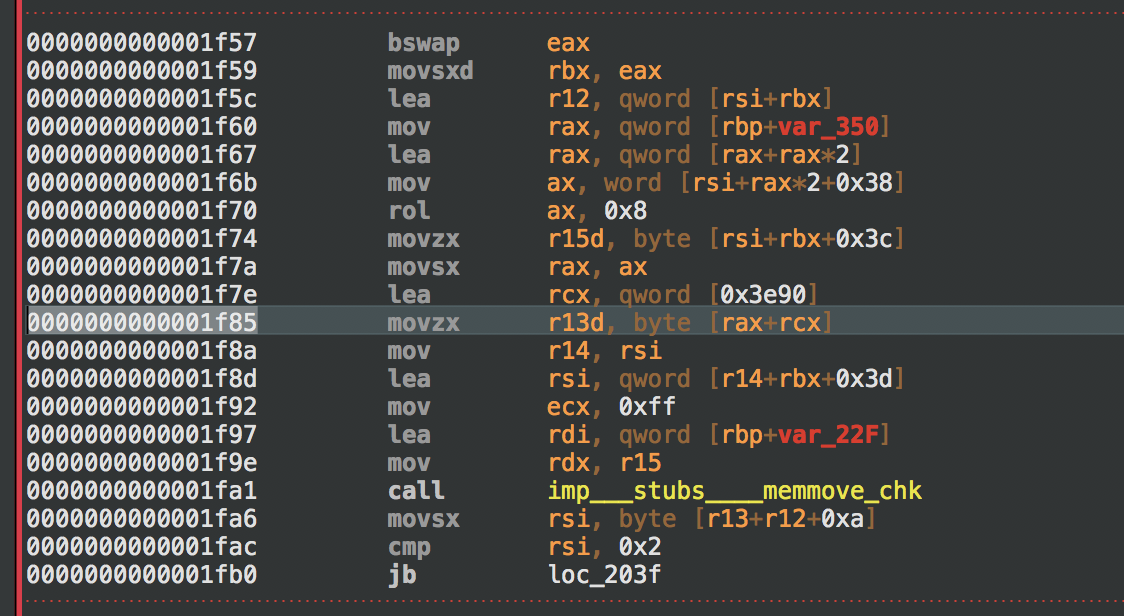 The rsi register points into the memory mapped font file. A value is read out and stored in rax which is then used as an offset from rcx which points to the text segment of the executable in memory. A lookup is done on a hardcoded table and parsing proceeds from there. The integer read out of the font file is never validated.

When writing or reversing a Spotlight importer, the main symbol to first look at will be GetMetadataForFile or GetMetadataForURL. This function receives a path to parse and is expected to return the metadata as a CFDictionary.

We can see, from the stacktrace, how and where mdimport jumps into the GetMetadataForFile function in the Font importer. Fuzzing mdimport is straightforward, crashes and signals are easily caught.

The variety of importers present on OSX are sometimes patched alongside the framework libraries, as code is shared. However, a lot of code is unique to these binaries and represents a nice attack surface. The Spotlight system is extensive, including its own query language and makes a great target where more research is needed.

When fuzzing in general on OSX, disable Spotlight oversight of the folder where you generate and remove your input samples. The folder can be added in System Preferences->Spotlight->Privacy. You can’t fuzz mdimport from this folder, instead disable Spotlight with “mdutil -i off” and run your fuzzer from a different folder.